Nadine Norman’s recent exhibition, “Re collections,” comprised three multi-media installations. One could be described as a wall-paper-like pattern drawn with ash and various stencils which covered an entire wall in the back room of the gallery. When observed for some time, the graphic texture of the pattern would dissolve into many small swastikas which seemed to be emerging from the surface. In the adjacent room, seven cakes of soap baked with ash and cast from common soaps were mounted on small dishes at about the same height one would expect to find a soap dish in a bathroom. Displayed on the walls of the third room (which is, in fact, the one entered into first on visiting the gallery) was a series of thirty digitally enlarged polaroids divided into five- and two-foot squares, and one single picture; each depicting a couronne funeraire, i.e., one of those small porcelain wreaths often found in French cemeteries.

Unfortunately, this exhibition has been subjected to a very linear and literal-minded reading. Focusing on the one installation where a swastika actually appeared as the means or, to be more precise, as the material of representation as well as its object, many viewers and critics could only discuss the exhibition in terms of “for” or “against.” (That is, they were commenting on it in about the same way any swastika drawn on a wall in a public space – or part of a space open to the public – would be commented on.) As it is indeed hard to imagine any contemporary work that speaks “for it” and demands at the same time to be taken seriously as a work of art, it should not be too surprising that Norman’s work has been immediately acknowledged for being “against it.”

The questionable way of privileging one work out of three is notable. What matters more, however, is that by trying to translate this exhibition into a direct political statement, we forfeit the opportunity to consider its formal and conceptual peculiarities and to see these works for what they are: a partly ironic and decidedly blasphemous discourse on certain modes of representation which figure quite prominently in the contemporary culture of Holocaust-Memorials. Regarded as a commentary that refers to a specific “art of memory,” they have a lot of esprit and an impact which is at least partly political.

As an introduction to the topic of mourning and memory, the polaroids functioned on at least two levels. On the one hand, they alluded to a practice which, if unfolded on the political platform, has become one of the most ostentatious and effective performances of mourning we know. To lay down a wreath at a memorial, be it for an unknown soldier or for the Jews of the Warsaw Ghetto, has become an inseparable part of the ritual of many state visits. There is something essentially theatrical about every act of mourning once it directs itself outwards and becomes manifestnot as a ritual but rather as a kind of mise-en-scene that requires a specific range of props and poses. 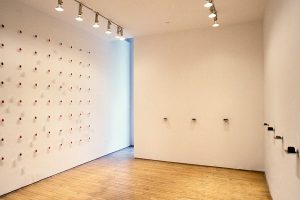 More importantly, the very arrangement of these pictures helps to drawl a line between memory and remembrance, or at least, to get a little closer to the latter. Because, literally, remembrance is remembrance, an artifact built from scattered fragments which have been (re-)collected to constitute a simulacrum of intactness. And, of course, this describes a process which produces its own margins and leftovers – as expressed in the tripartite piece. What presents itself as a testimony to memory is often nothing but a work of remembrance – a product so thoroughly processed that both its origin and references have been obliterated. What is more, the process of re-membrance, as a re-working of material(s), always involves a certain disfigurement. This was evident in the soap series where the different stages of production became visible upon scrutiny, revealing that what at first sight seemed so solid was actually highly fragile (“to be handled with care,” and certainly not to be used as a touchstone).

It has frequently been suggested that in the age of virtual images a monument might offer the one alternative of solidity and permanence, both guaranteed by the very materiality of the object; and when it comes to Holocaust Memorials, these suggestions will, for their own self-legitimation, draw on the necessity of constantly maintaining the memory of what happened. Norman, on the contrary, lets temporality inscribe itself into each of the small objects she has produced. The soaps and the wall-pattern are falling apart under our very eyes, although this is a process which covers a period of time that is much longer than the time usually spent in contemplation of the exhibits. Not only does this comment on the futility of any attempt to construct a lasting representation of what was there to be remembered, it also points out that temporality might be the decisive quality that describes every true act of memory; that more than anything else, memory is subjected to temporality, but in this it can be trusted.

There is something else to be said about the form Norman has chosen to present her soap series. In a way, she has re-enacted the whole process of mounting and exposing which has taken place every time a statue or monument has been erected before the eyes of the public (one could just as well say that this also applies to the set-up of many exhibitions and museums); but she has re-enacted it on a much smaller, life-size, scale. With regard to public monuments, this can probably be read as some kind of travesty, an ironization of a practice which definitely has a pompous and ridiculous side to it. What may be more interesting is that we learn how the effort of bringing something closer (“making it life-size,” so to speak) turns into a trivialization of the very thing it strives to represent. Norman is well aware of this, but that does not make things any more bearable once the full implications of this installation have been recognized.

Finally, each of the three works can be seen as a perceptive paraphrase of a mode of representation that can be found in various Holocaust museums such as the Auschwitz museum. By re-collecting the property (shoes, glasses, photographs, etc.) of Holocaust victims and arranging them in large heaps, the curators have certainly intended to give an impression of multitude. But multitude is transformed into mass, and the single object vanishes within a shapeless bulk of things that have lost all their significance except that of being added to something that is already too large to be grasped. When Norman was adapting her work to the conditions of the space, she was working to create a sense of having, at the same time, too much and too little to see. The pervading feeling is one of lacking; still it needs all the work Norman has done to make this lacking present – to memorize it – this time not as the lack of representability but as the lack which arises from the representing activity.