For the exhibition “Fabrications,” curator Kim Fullerton brought together the work of queer photographers Catherine Opie of Los Angeles and David Rasmus and Hamish Buchanan of Toronto. Fullerton’s catalog essay locates their work firmly within the performative school of gender studies, a discourse that has focused on the process by which sexual identities are enacted, performed, fabricated. In different ways, and with different degrees of success, all three photographers attempt to challenge normative categories of gender, sexuality and sexual identity through their work. Their shared interest in locating the terrain of the corporeal as a site of social inscription and cultural meaning, opens new territory for the active, productive and decidedly “queer” subject.

All the works in “Fabrications” foreground the body as a terrain of competing meanings, and none moreso than Opie’s diptych Dyke and Self Portrait (1993). The first of these two photographs presents the nude back of a woman with a tattoo of the word “dyke” on her neck. The second is Opie herself, with a stick-figure drawing of two women in a scene of lesbian domesticity scratched into the flesh on her back. Here, Opie transforms the corporeal into the textual, underscoring Elizabeth Grosz’ assertion that the embodied subject is always “marked, scarred, transformed, and written upon or constructed by the various regimes of institutional, discursive, and non-discursive power” (Space, Time, and Perversion, 1995). While marked by and within culture, these subjects have foregrounded their own agency through signs of their own making. Such strategies of self-definition offer the possibility of subversion, contestation and reconstruction of the meanings ascribed to one’s own body.

Opie’s work problematizes preconceived assumptions of lesbian identity, opting for representations of lesbian experience that are honest, direct and provocative. For the series Being and Having (1991), Opie photographed several of her dyke friends and cropped the portraits close enough to see the mesh of the conspicuously false mustaches. At a distance, the faces read as male, but with closer examination they can be seen to be female. These works go beyond simply exposing constructed expectations of what constitutes femininity and masculinity. These photos offer glimpses into modes of self-identification that are fluid, shifting and mutable.

Instead of marking or revealing the body, Hamish Buchanan’s Veiled Men series (1995) enmeshes the figure behind the translucent fabric of the veil, a trope traditionally associated with the “feminine.” By posing his subjects with the “unmasculine” symbol of the veil, Buchanan codes his subjects as queer, disallowing recuperation of the images into a heterosexual economy of looking. The constructions of Opie and Buchanan are ambiguous, but in destabilizing expectations of sexual identification, their works privilege queer readings. 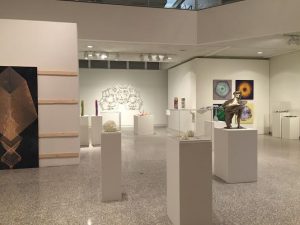 Buchanan’s work also acts as an expression of grief and loss. The artist uses the veil for its multiple associations with allure of the hidden, the promise of discovery, the potential for transformation, and the shadow of mourning. These associations are used to create a space for mourning in the midst of AIDS while simultaneously rendering the male nude as sexual and desirable. Buchanan’s deliberately sexualized representations of gay men are meant to counter the anxiety associated with sex experienced by an entire generation since the arrival of AIDS.

The series entitled Legacy (1993) by David Rasmus is both playful and confrontational. Replete with smeared lipstick and unkempt wigs, the women and men in Rasmus’ photos gaze directly out at the viewer. The humour at play here is heightened by the deadpan, serious expression on the face of each subject. The hairy chests of the males further emphasizes the ironic tone of the work. The series attempts to play havoc with stable conceptions of gendered identification. However, in failing to articulate any difference between the positions occupied by its male and female subjects, Legacy stops short of transgressing the normative hierarchies it attempts to critique.

Scholars Molly Anne Rothenberg and Joseph Valente have argued that such parodic deconstructive approaches run the risk of reinscribing the hegemonic discursive systems they attempt to undo by their very dependence on those “operative structures” against which they define themselves. “[I]n formally freeing postmodern theory of its residual essentialism, this new trend risks consolidating that essentialism in less visible but more substantive terms.” (Critical Inquiry, Winter 1996). In other words, do the performative strategies in “Fabrications” go beyond polarized notions of masculine vs. feminine, or do they actually further entrench binary opposite categories of gender? Can one go about describing what queer is without falling into essentialist traps?

All three photographers in “Fabrications” are overt in staging their work, in creating, fabricating realities. They play off of the veracity and (once held) belief in the “transparency” of the photographic medium. Far from revealing some underlying truth about the constructed “nature” of sexuality and gender, these works add to the uncertainty, complexity and richness of (queer) subjectivity. The works of Opie and Buchanan serve to explore located identities that are consciously constructed and self-determined. While all three artists poke fun at normative gender constructs, Buchanan goes the farthest in creating his own queer vocabulary.

“Fabrications” is one of several recent exhibitions by lesbians and gay artists whose shared practices form the basis of their collective work. Leaving behind identity politics, much of this work focuses on representations of the self based on the performed, the enacted, on what one does instead of simply what one is. The growing amount of recent queer scholarship concerning the performed points to a shift in interest defining a queer praxis. In the catalog for the 1995 exhibition “In A Different Light: Visual Culture, Sexual Identity, Queer Practice,” artist and curator Lawrence Rinder has argued that queerness “is a term which subverts or confuses group identification rather than fostering it,” suggesting that it is precisely the current “crisis” in lesbian and gay identity which may be the driving force behind the wealth and richness of art being produced by queers today.

The works in “Fabrications” posit queer subjectivity in ways that are political and transgressive. Elizabeth Grosz has argued that we are always bound up and implicated within the systems of privilege and regimes of power that we contest. This does not imply that we are complicit with or supportive of those same oppressive structures. What “Fabrications” succeeds in doing is foregrounding queer practices that assume agency in the face of a patriarchal, homophobic and heterocentric society. If these works cannot dispense with “masculine” and “feminine” signifiers, then at least they rewrite the script of gendered identification on their own terms and with their own lexicon. 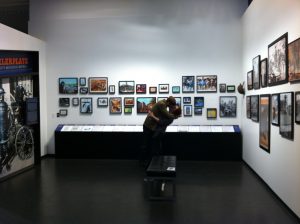