It is the red of these images that most directly alludes to the interiority of the body, a landscape made up of tendons, veins, nerves. Goodwin’s retrospective “Signs of Life,” featuring mixed-media works, sculptures, drawings and an installation, is an extended and eloquent meditation on that dense layer of discourse uniting consciousness and the passions that the artist uses to define humanity.

Two series created over the past five years are presented, La memoire du corps and Nerves. Goodwin employs a critical vocabulary of forms whose shapes frequently derive from baths, beds and clothing – elements intimating that the body is a place of existence. The attraction of these images lies, precisely, in their relation to the corporeal/viewing subject. Like the writings of Franz Kafka, Primo Levi, Elie Wiesel and Antonin Artaud that serve as its literary inspiration, with the practices of Joseph Beuys and Bruce Nauman, the human scale of the representation elicits issues of response. Goodwin’s La memoire du corps XX (1994), with its dense layering of tree-roots (or perhaps veins) on a sanguine ground, for example, invites participation as a contract of total attentiveness. In its engulfment of the field of vision, and with the overlap of concrete materiality denoted by the work’s saturated pigmentation contrasting with its translucent mylar support, what is disclosed is a public gesture of vulnerability and a private landscape of affections.

Certain drawings even more evidently take on the quality of skin. Like corporeal archives, these works make visible the imprint of a series of relations with/in the world. By the process of smudging, tracing-over and erasing marks, La memoire du corps VI (1991-2) relates to the dermis as a corporeal surface formed and transformed by the incidents of cultural and social enactment. The image given is one of a bathtub, its red outline traced on a black ground. It is this graphic trace, so readily apparent, that admits the body’s history, both in its external aspect as the memory of the body’s attachment to historic time, and at the level of presenting its sensations. In this entwining, the sensuous transference of a presence (of an absent body) that paradoxically situates subjectivity as an open space, intimates that, as neither exteriority or interiority, neither part nor totality, neither full nor empty, Goodwin’s body-scapes are visible conduits for emotional ties.

Affect, in its Freudian formulation, refers to the passions and to impulse, defining a pre-OEdipal state. More simply, it admits an interconnectedness with others that still recognizes difference. This relational and fundamental quality is multiply configured in Goodwin’s work. The exquisite elliptical form of the plaster sculpture Sargasso Sea (1992) plays on the elasticity of signification. This sitz bath pushed together suggests the restorative comforts of water, its curative properties, its pleasures. Water containers and bodily fluids share the quality of letting things wash over us. But, at the same time, according to the legend privileged in the work’s title, anything that goes into the Sargasso Sea, an actual bed of seaweed, will become hopelessly entangled and disappear. Moving from one (cultural, physical) body to an other, the apprehended metaphor for this vessel is ambivalent. In the disjunction between the two representations the viewer’s position is set up such that the body-vessel traces a phantom passage within and among two orders of interpretation. Part-flotation device, part-sarcophagus, it operates in analogy to the self, that is, as an enigma, as the trace of an organic, biological and animate existence, and as the mystery of a constituent subjectivity unrecollectible, untellable, indissoluble.

At specific places the work is more than a transient structure. Descent (La memoire du corps VII) (1992), for instance, locates a humanistic geography written in the articulation of a large-scale rose-toned drawing and a suspended steel sculpture. Both images are simultaneously frail and powerful. The subtlety and richness of their exchange expresses something of an infusion of energies, since the drawing maps the making of a bodily junction, and the sculpture resembles a skeletal construction.

But it is also possible to interpret these works as the examination of the possibilities of relational (re)alignment. Certainly La memoire du corps I (1991-2), a mixed-media piece combining a sculpted pendulum with a drawing of a corporeal joint, would suggest this reading. And in like manner, the sculpture Spine (1993), a cast and plaster vertical of enormous semiotic strength and great formal simplicity, allows for the conceptualization of progressive linking between the dynamic of self-sufficiency and a more generalized cultural sensibility. 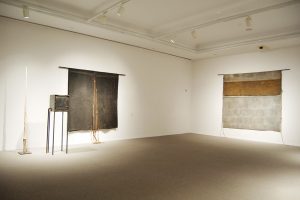 Goodwin’s theme, and curator Jessica Bradley’s by extension, is the tenuous confrontation between life and death. Bradley envisions it as life energy, referring to the fluid state of development to which biological entities are attached, and by which they are formed in the culture. Goodwin’s vision might itself be more cutting, and hence more poignant. Grieving Knife (1991), a mixed-media piece to which a real knife is attached, and the memorial tablet/sculpture Distorted Events (1995), that combines the sometimes partial impression of serial numbers with a shovel, for example, disquietingly call to mind the alienation (self-imposed or otherwise) of existence. As a representational paradigm, this crisis is particularly resonant. Are these works an attempt to screen out emotion, or to come to terms with it? In either case, they confront the viewer by raising the question of what is acceptable as public display. Such a personal and political decision is only possible, Goodwin intimates, through the absolute honesty of our address and an acceptance of the incomprehensible.